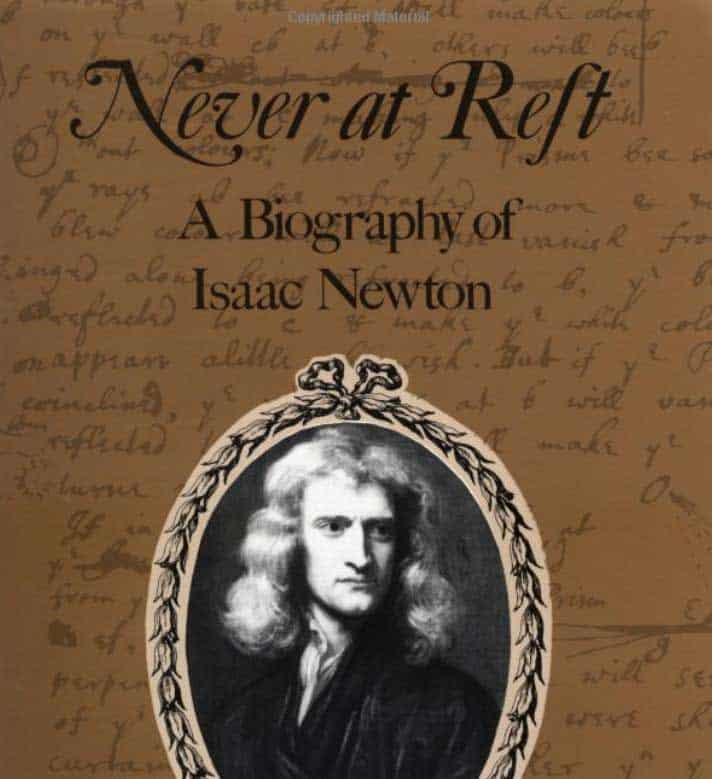 Isaac Newton is co-credited with discovering calculus along with Gottfried Wilhelm Leibniz. He became the very first person to quantify the law of gravity. He also figured out that white light is in a true sense an unaltered combination of spectral colors. These were amazing discoveries that led to a huge transformation in science.

He also instituted a style of science that looked for noncasual answers where relationships of natural phenomena were mathematized without their ultimate cause being speculated. For example, gravitational attraction. Many people pressurized Newton to explain why gravity happens but he resisted that. He was satisfied that he could provide a mathematical explanation for it.

Never at Rest by Richard Westfall.

This is the best Isaac Newton biography. It is a majestic book. This book is the only book on Newton that provides a detailed observation of his entire scientific work along with his work on alchemy and his religion. This book covers over 30 years of his life. This book is magnificently written. This is a dated book because it was published in 1980 and there has been a lot of change in the Newton scholarship since. There are other books that represent different attempts made to come to terms with Newton’s work in a more detailed way than Richard could do in 1980.

A reason behind that is now there are digital websites such as the Newton Project in England that edit Isaac’s religious and theological writings and his prophetic writings as well. There is also a Chymistry of Isaac Newton website by the Indiana University that edits Isaac’s alchemical papers and his work on chemistry. In 1980, Richard could not have accessed these papers. Hence, Never at Rest does have some material that could not be accessed at the time the book was written and yet this book has an amazing synthesis.

A Portrait of Isaac Newton by Frank Manuel.

This is also one of the best Isaac Newton biography. This book begins with Newton’s childhood in Lincolnshire and it also covers his days at Cambridge and then his life in London. This book adds more to the story on top of Westfall’s book.

This book was published in the year 1968 and hence is a more dated book than Westfall. Frank was an amazing historian and even better writer. Out of all the books written on Isaac, this book makes for a great and engaging read.

If you are looking for the best Isaac Newton biography that focuses on his life, then this book is a must-read for you. This book showcases Newton’s character in a Freudian psychoanalytic style. Frank has attempted to explain Isaac’s psychology in connection with a lack of father figures in his childhood.

There was an auction in 1936 in Sotheby’s where Keynes acquired half of Newton’s manuscripts. After reading them, Keynes wrote an essay of eight or nine pages called Newton the Man in 1947 which is available online and a must-read for anyone that wants an interesting insight into who Newton was.

HOW TO USE A VISA GIFT CARD ON PS4?

How To Keep The Radio On When The Car Is Off?

Speech To Motivate And Prepare Students For Examination

Author VanessaPosted on May 19, 2021May 20, 2021
Is it time already? Are your exams closing in? You could be someone that has always remained on top of their lessons or you...
Read More

Examples of Measurable Goals for Employees

Author VanessaPosted on May 30, 2021June 2, 2021
If you want to motivate your employees then you must assist them in setting goals while also supporting them when they achieve the goals....
Read More

Author VanessaPosted on June 15, 2021June 15, 2021
Everyone experiences anger. But the question today is, how do you express it? Do you act on your anger or keep it bottled inside...
Read More

Author GracyPosted on July 27, 2021July 27, 2021
Being a child whose parents are in the army comes with a rollercoaster of feelings. While they are proud of their parents’ contributions to...
Read More