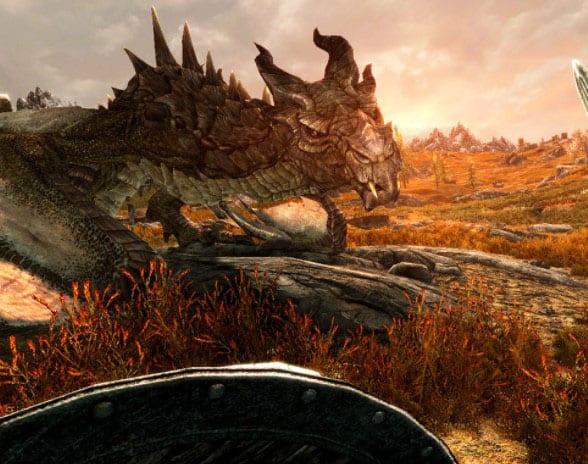 Is Skyrim VR worth it – Quick Verdict

The graphics of the game are a little dated but it manages to be an amazing RPG romp with fun, freedom, and frolics. The mechanics are intuitive and well made while providing an exciting and immersive experience to a game that is seven years old.

Old Game in a New Style

Are you wondering if Skyrim VR is worth it? It is the same game that you already love in VR. The graphics of the game are dated since it is old and you may experience some clumsy characters during gameplay.

In VR, Skyrim has its pros and cons. You can easily tell that this game is a seven-year-old game. However, even with old graphics, the port into VR works really well. Why does it work? Because Skyrim has always been an incredible game.

The story is the same as the authentic game even in VR. You begin in the back of a cart that is pulling you to your death. You get saved by a dragon and soldiers attempt to stop you while spiders attempt to kill you before the story even starts. However, the joy of battling the creatures from the universe of Elder Scrolls is the highlight of this game. In the VR version, you battle them in front of your eyes as they appear larger than life.

The controls of this game are intuitive and have been designed well. There are many settings that can be customized and the game play can be modified based on your preferences. There are options such as realistic bow aiming, physical sneaking, realistic swimming, and realistic shield grip. These features enhance the immersion level of the game while providing a really cool method of control to Skyrim VR.

You get an amazing experience when you block someone by raising your shield or fire a bow by pulling a drawstring at a dragon or sneak on someone and pick their pocket by ducking down.

So is Skyrim VR worth it? The VR version of the game is a great way to experience the wonder of this game again in virtual reality. If you have never played this game then this would be a brilliant time to introduce yourself to it.

Skyrim VR provides a good story, freedom to explore, and an amazing scale which makes it as good as the genuine game. The VR mechanics of the game are realistic which makes it simple to play and very immersive. The one difficulty while playing this game will be standing up for hours during game play. This game can be quite addictive and you are sure to spend hours playing it.

Best VR games to play without a controller for Android

How much is the Down Payment for a 500k House?

Does Alexa Have Bluetooth?

Author VanessaPosted on June 19, 2021August 7, 2021
Because of Amazon, it is very popular to own a smart speaker now. You can use your smart speaker to issue commands to your...
Read More

Author AnnaPosted on June 9, 2021August 7, 2021
Looking for a mountain bike with great resilience and features in the Philippines? Wondering what it will cost you? Top Mountain Bike Prices in...
Read More

HAWT or VAWT: Which Type of Windmill Has Better Performance?

Author VanessaPosted on June 5, 2021August 31, 2021
Our world is full of natural providers of energy – wind, water, coal, etc. And, there are several ways in which we obtain this...
Read More