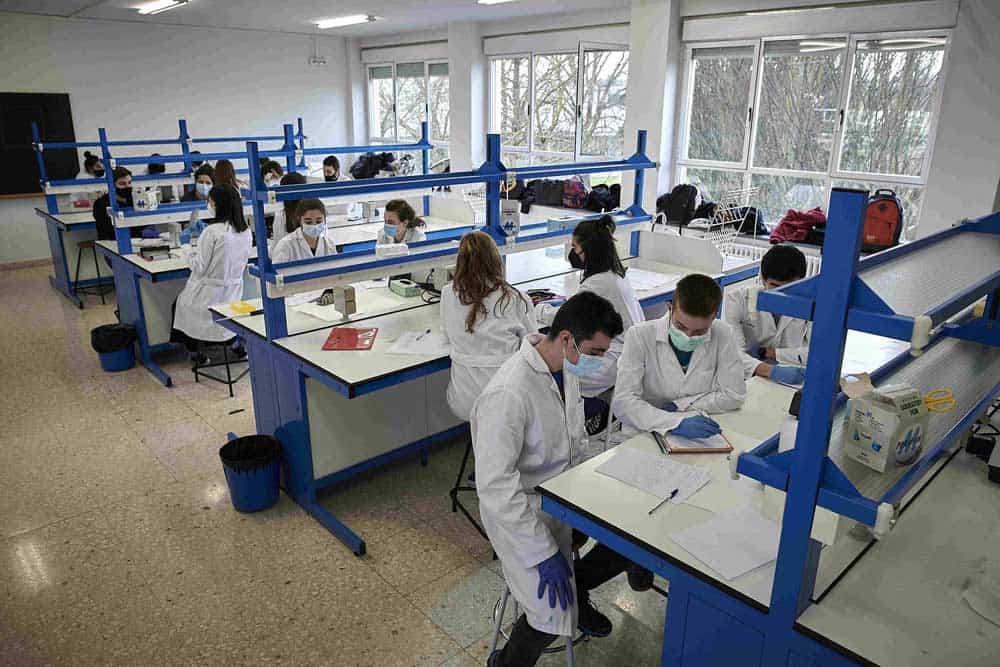 The Government has decided that all university degrees in Spain last four years, except for even longer health or technical studies and joint degrees with other European countries; and that the masters are of one or two years.

The Ministry of Universities has prepared the draft of a new decree for the Organization of Official Education in the Spanish University System, to which EL PAÍS has had access and with which it puts an end to the so-called “3 + 2 war” (three years of career and two of master’s degree).

In Spain, three-year degrees are very minority – about 24 degrees are offered, most of them in privately owned universities – unlike what happens in the rest of Europe, and only two promotions have been given time to graduate.

With this measure, the Minister of Universities, Manuel Castells, intends to stop the creation of more short degrees, designed for immediate incorporation into the labor market, but which do not respond to the spirit of a degree, which is to provide general knowledge of an area and then specialize in a master’s degree.

Universities that have three-year degrees – the majority in Catalonia – will have to adapt and extend them for another year. Many private campuses have also created short degrees, for example in Gastronomy; other audiences, such as the University of Salamanca, in Global Studies.

The duration of the degree is the cornerstone of the decree, which also encourages dual mention careers – interwoven with the company -, regulates open degrees and successive cycles or audits, for the first time, the qualifications to be retrained by campus .

Enrollment for master’s degrees in Spain (with a price ranging from 590 euros to 2,800 euros this course) is much more expensive than for degrees (from 518 euros to 1,660 euros) and that is why students have been there for seven years very reluctant to 3 + 2.

This formula implied that, to achieve a complete training, students had to take a two-year master’s degree that would allow them to have a five-year training, which was the norm up to that time. As a result, students were forced to pay for one more year of graduate school.

The student discontent was joined by that of the unions, who were not convinced that the teachers taught fewer hours of class in the grade. The new decree consolidates the 4 + 1 formula (four years of undergraduate and one master’s degree).

The Ministry of Universities considers that as long as the price of the master’s degrees is not reduced – the fees are decided by the autonomous governments, which demand more funding to compensate for the drop – a two-year postgraduate program hinders the professional development of those with fewer resources.

In the last decade, the three-year diplomas (Nursing, Teaching or technical engineering) have disappeared in Spain and the degrees that lasted five years were reduced to four —with exceptions— and were renamed as degrees.

In return, the universities began to teach more master’s degrees, including the so-called habilitating ones, which are compulsory to practice, for example, as a lawyer or as a teacher of secondary education. Therefore, the 4 + 1 format – that of the United States and Asia – prevailed over the 3 + 2 format, more generalized in the rest of Europe.

But in 2015, seeking the arrival of foreign students, the Government of the Popular Party, with José Ignacio Wert at the head of the Ministry of Education, approved a decree that allowed the implantation of three-year degrees – “the study plans will have between 180 and 240 credits ” , It was stated in the text (60 credits are equivalent to one course) – accompanied by masters of two. The students, impoverished by the economic crisis, took to the streets to protest in the green tides.

Wert also did not seduce the conference of university rectors (CRUE), with whom he had a terrible relationship in years of cuts. They considered that a “prior evaluation” was needed before implementing the three years and, divided between them, agreed in February 2015 to a three-year moratorium without short titles.

Although some universities did not wait and began in the 2016-2017 academic year to offer a reduced degree. The General Council of Universities – a body formed by the ministry and the rectors – agreed in 2017 that only careers would be created that would meet market needs and it was necessary to wait until 2018-2019 for them to finally proliferate.

With the new decree, Catalan universities will have to extend a score of three-year degrees focused on new technologies and digital design (video games, animation or web applications). This course, for example, is teaching the degree in Bioinformatics, with just 40 places, in English and divided between the universities of Barcelona, ​​Pompeu Fabra and Politécnica de Cataluña.

Students already enrolled will continue with their three-course curriculum and this will have to be modified when the degree has to be re-accredited before the evaluation agencies, something that happens every six years. In other words, most of the grades that were approved will be readjusted before the 2023-2024 academic year.

Juan Hernández Armenteros, professor of Applied Economics at the University of Jaén, believes that three-year degrees could not progress. “In 2010 and 2011 there was a lot of pressure for the four-year degrees. Especially from the professional colleges [the experts and the nurses wanted to be graduates], and also from the teaching staff, who did not want to lose curricular development ”.

Last May, the Ministry of Universities proposed in a draft to open the door to more three-year careers that would focus on “those areas of scientific, technological, humanistic and cultural knowledge that respond to the new social, labor and economic demands”, it was pointed out in that text. But the unions reproached him for having taken the draft to public consultation without negotiating and the process came to a standstill.

Before the Bologna Declaration, which was implemented in 2011, only the degrees of the engineering and architecture itinerary required submitting a final degree project, but since then it has been required in all areas of knowledge.

The Ministry of Universities, however, takes some weight off this practical training. At least it will mean 6 credits of the degree and a maximum of 10% of the total, when now it is 12.5%. The engineering master’s degrees may begin to be studied without having defended the degree work.

Workers’ Commissions, the majority union at the University, harshly criticized 3 + 2, which in its opinion “punishes students with fewer resources and favors the market for graduate degrees in private universities.”

Less specialization
Does it make sense that Gastronomy or Videogames is a university degree instead of a higher degree of Professional Training? The ministry believes that it is intended to cover the rapid access to professions with the University’s label.

The spirit of a degree is to provide solid and general content, and then specialize in the master. For example, be a computer engineer (four years) and take a one-year master’s degree in security.

In Spain, studying a career was jack, horse and king for several generations. Universities followed the Catalog of Official Titles of the Ministry of Education – for example, Law, Medicine or Nursing. Until the implementation of the Bologna Plan (promoted from Europe to standardize higher education) allowed institutions to design their degrees (audited by the central and regional governments).

Then a war broke out to offer the most specific and attractive title to students: Videogames, Criminology or Protocol. Spain has gone from having 116 degrees and diplomas to 365 different careers, while the titles total 3,008 throughout Spain due to their different nomenclature.

All this evolution was made without any regulatory protection, so that the name of the Humanities careers has multiplied by six (from 20 titles it has gone to 120) or the engineering by two (from 50 to 104), according to data from the Observatory of the Univesitario System. The rectors are aware that this fever for titles has to be stopped and that it must be clear what is taught and how.

At present, each degree is assigned to one of the five branches of knowledge – Social Sciences, Natural Sciences, Engineering, Humanities and Health Sciences – but the new decree forces to be even more specific: the degree must be labeled within one of the 25 specified knowledge areas.

The idea of ​​the Bologna Declaration was to create an “easily understandable and comparable system of qualifications”, but time has shown that it is a muddle. The Observatory of the University System, which groups teachers from the public universities of Barcelona, ​​is very critical in its study University degrees: how many and which ?, from 2019: “There are fewer references, which may imply difficulties in the choice of career or in the hiring of personnel ”.

Open degrees
For years, the Pompeu Fabra and Carlos III universities have allowed students to choose subjects from any Humanities and Social Sciences major or within the different engineering programs in the first two years, but without abiding by any regulations.

The new decree stipulates that only 10% of places with this peculiarity can be offered, since it is very complex to balance the schedules of these students and the itineraries. “Open degrees must combine subjects from at least three degrees from the same branch of knowledge,” says the document.

The danger is to cover so much that in the end nothing is known. Cristina Gelpi, vice-rector of the Pompeu Fabra University, maintains that “in transversality it helps a lot to work for teaching projects so that the result is not a sum of disconnected pieces, [and the student becomes] an apprentice of nothing. You have to acquire common skills and some fundamentals ”.

Students will have to be tutored. Francisco Mora, rector of the Polytechnic of Valencia, explains that his university realized that high school students do not know how to differentiate between engineering and that it is possible to stop dropping out by giving them the opportunity to approach different specialties in the first years . This year three open degrees have been launched in Galicia.

Successive cycles for engineers. Polytechnics have managed to ensure that the final degree project is not a hindrance to continue engineering studies that are eternal because of their difficulty.

The decree states that “it is possible to access master’s studies without having passed the linked degree if the only credits that remain to be passed are those corresponding to the final degree project and a subject of six credits”. In the past, Engineering students faced six courses and a final degree project before graduating.

With Bologna, the process was divided into two – you have to finish a master’s degree of a year and a half or two years to sign projects as an engineer – which has discouraged many potential students and their families. Technical vocations, in fact, have fallen 30% in two decades.

Permanent education. In universities, especially distance ones, expert titles are offered in something precise – for example, in data protection – that do not qualify to practice nor are they official degrees, but they are in enormous demand. Nobody controls its quality. The current decree forces all titles to have a head of staff and an approved schedule: do not give up.

Author AnnaPosted on March 12, 2021August 8, 2021
In order to preserve the commercial balance of the area and avoid gentrification as a secondary effect, the Barcelona City Council’s government commission has...
Read More

Is Burj Khalifa a hotel or a residential building?

Author Maria MartinezPosted on October 18, 2021October 18, 2021
Burj Khalifa is known as a ‘vertical city’ and a ‘living wonder.’ The beauty and the elegance it represents is no wonder a treat...
Read More

Author AnnaPosted on March 9, 2021March 2, 2021
Since the beginning of the pandemic caused by COVID-19, children around the world have lost an average of 74 days of education each ,...
Read More

Author AnnaPosted on March 2, 2021August 8, 2021
“It is necessary to know the truth but it is not enough; those responsible (for the death of journalist Jamal Khashoggi) must be tried...
Read More